The steady internationalisation of China’s renminbi will see at least 40%, or $100-billion, of China’s trade with Africa being made using the currency unit by 2015, according to research just published by Standard Bank Group.

Standard Bank economist Jeremy Stevens, currently based in Beijing, says the $100-billion in renminbi-denominated trade by 2015 amounts to more than the total Sino-African trade in 2010. In addition, at least $10-billion of Chinese investment into Africa will be…

FMO, one of the largest bilateral private sector development banks worldwide, made a profit of EUR 69 million in the first half of 2011, an increase of 34% compared to HY2010.

In HY2011, FMO provided financing totaling EUR 342 million to businesses in developing countries - up more than EUR 100 million from HY2010's EUR 234 million in new investments - helping the private sector create jobs, and strengthen sectors essential for sustainable growth in developing countries, such as the… Continue

At the 10th edition of the Ghana Banking Awards, Ghana’s leading independent bank came up tops in a number of categories. The bank’s operations in the 2010, showed a formidable performance even though there was a general difficulty across the banking industry.

The pan-African financial services Group, United Bank for Africa (UBA) is to partner with the administration of President Abdoulaye Wade of Senegal in furthering the economic growth and development of the West African country. To this end, the bank has made a fresh commitment to fund key projects in energy, agriculture and transportation sectors of the Senegalese economy.

An agreement-in-principle to this end, was reached at a bilateral meeting held in Dakar, Senegal by the…

Rand Merchant Bank (RMB) is launching a document to help clients with making decisions about investing in Africa, the bank announced on Monday.


The document, titled 'where to invest in Africa?' analyses all 45 countries in sub-Saharan Africa.

"The detailed research answers the question our clients might have on investing in Africa," said Louis Jordaan, RMB's head of fixed income, currency and commodities (FICC) Africa. "Our comprehensive analysis of the African investment…

The Government of Tanzania has secured a US$250-million seven-year loan facility from a consortium of local and global financiers, led by Stanbic Bank Tanzania and its parent bank, Standard Bank Group (SBG), to fund development projects such as road and rural electrification.

The deal is a first of its kind for a sovereign government involving local and international commercial banks as well underwriting by multilateral financial institutions and commercial insurers. The loan also…

The Egyptian company which celebrates 10 years this year employs over 150 staff and has positioned itself at the forefront of electronic payment technology in Africa. The company currently serves more than 85 domestic and international banks within Egypt and in little time has expanded… 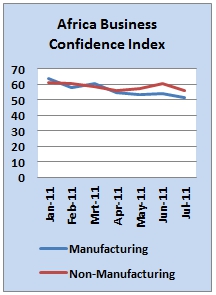 Amsterdam, August 1, 2011. The Africa Business Confidence Index (ABCI) for July shows growth in both the index for manufacturing and non-manufacturing sectors in Africa. The difference compared to June in…