As part of its contribution to the development and of micro small medium enterprises (MSMEs) in the country, Diamond Bank Plc has said it had so far disbursed a total NGN25bn to operators in the sub-sector.

The Head of Proposition for MSMEs of the Bank, Mrs. Chidinma Lawanson, who disclosed this at the “Diamond BusinessXtra Enterprise Series,” said the bank would continue to focus on creating value for MSMEs in the country who were largely ignored by banks and other financial…

The South African banking sector remained stable in the six months to end June and is well placed to withstand vulnerabilities and future adverse shocks, the Reserve Bank said on Thursday in its September 2011 Financial Stability Review.

The Financial Stability Review (FSR) document focuses mainly on economic and financial sector developments for the six-month period ended June with selected developments, such as the sell-off in emerging market economies' (EME) assets in…

The full merger of Oceanic Bank with Ecobank Nigeria, a member of ETI, will however, be consummated before the end of the year. At the end of ETI’s board meeting yesterday,…

Guaranty Trust Bank Plc (GTBank) has announced the appointment a new Deputy Managing Director and three executive directors into its board. A statement from the bank Thursday said that the move was in furtherance of its efforts to position itself as the bank of choice within the country.

According to GTBank, Mrs. Cathy Echeozo, who was formerly an Executive Director and head of the bank’s Institutional Banking Division had been appointed Deputy Managing Director at a recent board…

The Nigerian Stock Exchange, NSE, said it will introduce new sets of requirements for companies seeking listing on the secondary segment of the Nigerian capital market.

The NSE further disclosed that it is close to securing a full membership status among the World Federation of Exchanges, WFE.

Global and regional financial experts in the deployment and management of electronic payment systems gathered in Lagos last week at a conference on mobile money, and called on government to swiftly address Nigeria’s infrastructure challenges in order to support the country’s move into a cashless mode.

The round-table conference, which was organised by BusinessDay Media, with the theme: ‘Opportunities in Nigeria’s emerging cashless economy,’ attracted m-payment experts from South…

Access Bank in partnership with the Friends of the Global Fund Africa, Friends Africa, is scaling up the prevention and treatment of AIDS, Tuberculosis and Malaria through the Workplace Policy Workshops for 2000 Small and Medium Enterprises, (SMEs) in four African countries namely Nigeria, Ghana, Rwanda and Zambia.

The workshop, according to a statement jointly signed by Mr. Segun Fafore of Access Bank and Mr. Bello Bissalla for Friends Africa, will kick-off in Lusaka, sail through…

Diamond Bank Plc has granted interest-free loans worth about NGN10mn to five micro, small and medium scale enterprises, MSMEs in Nigeria. The MSMEs, which emerged winners of the bank’s “Borrow For Free Promo” organised between June and July 2011 in collaboration with Seancross Marketing Limited, received NGN2mn each.

In a statement by the bank, the promotion was designed to assist MSMEs understand the relationship between a business plan and access to finance. The bank said it was an…

Standard Bank yesterday reported a resurgence in corporate and investment banking activity in SA and elsewhere in Africa as local and global banks scramble for deal-making opportunities in one of the fast-growing emerging economies.

In an interview, the bank’s CE for corporate and investment banking, Kennedy Bungane, said competition for deal-making and to raise debt and capital funding was intensifying in Africa.

This was despite market turmoil from the debt crisis in…

After recognitions by the World Economic Forum and the African Banker Awards, Equity Bank Group has won the Africa Investor Award as the Best Initiative in Support of SMEs and the Millennium Development Goals.

During the awards ceremony, Dr. Mwangi reiterated the bank's commitment to enhance its customer product and service offering that has the capacity…

LASACO Assurance Plc has been appointed to lead 23 Nigerian insurance companies participating in the insurance of the new satellite to be launched by Nigeria before the end of the year - Nig Comsat 1R. The Nigerian Communication Satellite Limited would launch it.

This is coming closely at the heels of the Nig. Sat 2 and Nig. Sat NX both of which were launched on August 17th 2011 in Yasney, Russia. LASACO Assurance is also the leader of the Nigerian companies that are covering these…

Guaranty Trust Assurance Plc has recorded another impressive performance in its Gross Premium Income (GPI) and Profit before Tax (PBT) for the six months period ended June 30th, 2011. GPI grew by 28 per cent to NGN6.1bn per cent to NGN713.6mn compared to NGN511.2mn in the corresponding period last year.

Commenting on the result, Mr. Tosin Runsewe, the chief client officer said: “This performance reflects the quality of our company’s business model which has consistently delivered…

Diamond Bank Nigeria Plc has reaffirmed its resolve to sustain its marketability through creation of products that improve the standard of living of the people. The bank’s Senior Adviser on Retail Banking, Mr. Garry Marsh stated this during the bank’s Savings Xtra Season 4 Independence Draw, in Lagos, at the weekend.

He expressed the bank’s commitment towards offering variety of products that would help to empower Nigerians, especially customers of the bank. According to him, the… 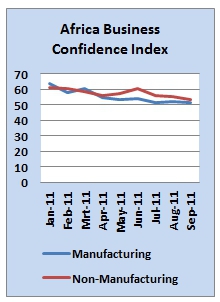 The Africa Business Confidence Index (ABCI) for September shows growth in both the index for manufacturing and non-manufacturing sectors in Africa. The difference compared to August in the…